This lovely bride is the niece of a good friend of mine. We snuck in a quickie bridal session while she was on her way through town. We borrowed a pretty white iron chair off the neighbor's patio - they weren't home, but we knew they wouldn't mind, and we were off and running. We also borrowed the neighbor's garage, while we were already in their yard pinching their chair.

Can you tell this was taken in a garage? With her cousin in the background holding up the fabric? 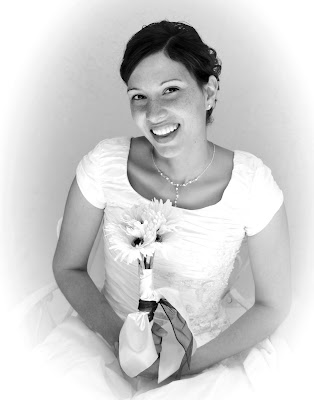 We also borrowed their step ladder - that we found in their garage - to get a little different perspective. 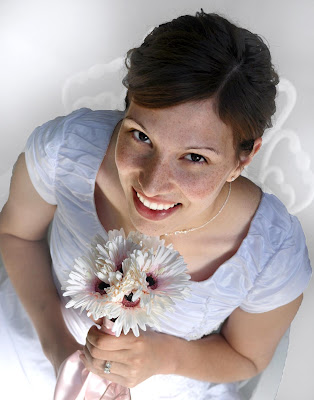 We also went across the street and borrowed another neighbor's yard - her cars were there, but she didn't answer the door, she was probably having a nap - so we helped ourselves. I love our little town! 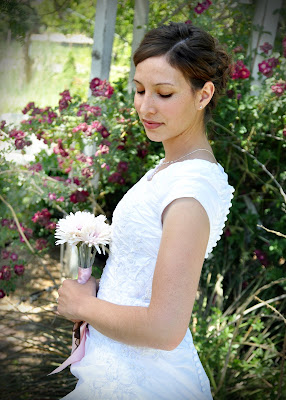 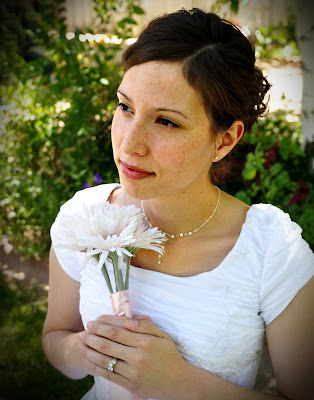 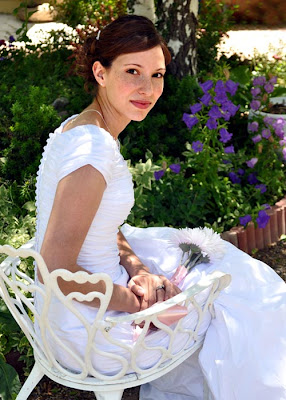 Isn't that chair pretty? Perfect for a bride, except it was kind of heavy to pack around the neighborhood.

Believe it or not, Diana wasn't wearing a single stitch of makeup! She looked so pretty without it, she really doesn't need any. Apparently, she's allergic to it and can't wear it, but if we all looked this good without it, the makeup companies would be out of business.

Wouldn't THAT be nice. 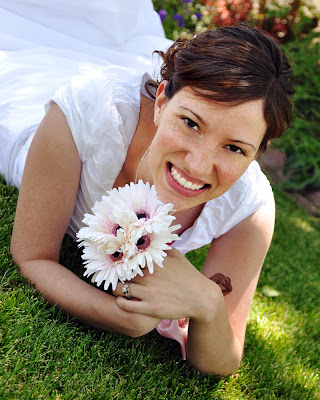 I loved her pretty freckles, I've never had any, so of course, I think they're great. 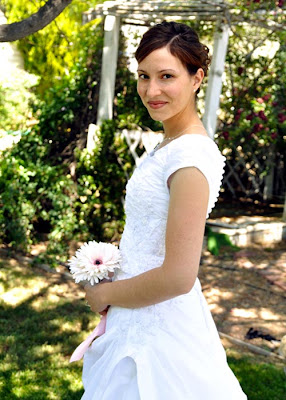 I wish we'd had a little more time and maybe one more location, but I think we got some pretty shots. We also had a great time.

Thanks, Diana, for letting me take your bridal portraits - it was great meeting you! Congratulations to you and Mike, I wish you a very happy life together. 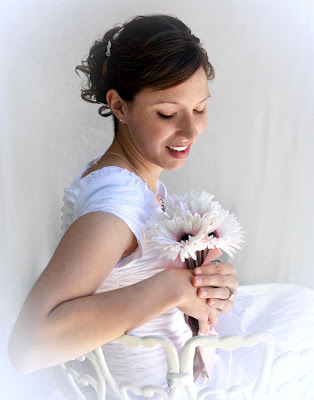 As a general rule, we don't watch R rated movies at our house. In fact, my husband hasn't watched a single R rated movie since he came home from his mission almost 20 years ago. Our church leaders have asked us not to, and Marty has followed that counsel to the letter. And I really admire him for it.

But I hate to admit it, I'm a more rebellious soul than he is - while I agree that most R rated movies are destructive, there is one that I really love, and even own. In fact, it's one of my favorite movies of all time - right up there with The Sound of Music, my all time favorite movie (see, I'm not too much of a heathen).

The movie is The Patriot. 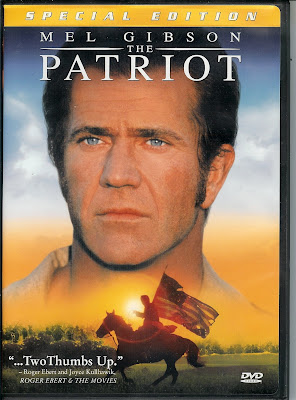 It's rated R for violence and blood, and there is plenty of that, in fact, there are a couple of parts I fast forward because they bother me. But in the case of a movie about the Revolutionary War, it helps to bring home the reality and horror of a time when wars were fought with sword and bayonet and musket and cannon.

What I love about this movie is not that it stars Mel Gibson and Heath Ledger......... 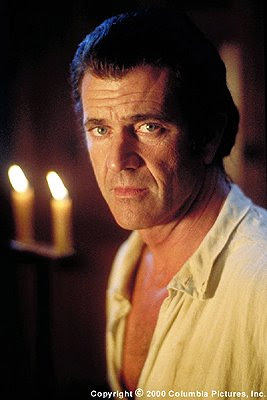 ...although that isn't exactly a downside. 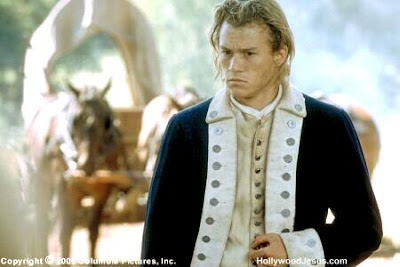 But that it poignantly demonstrates the love that our founding fathers had for freedom and the sacrifices they made for the cause of liberty. 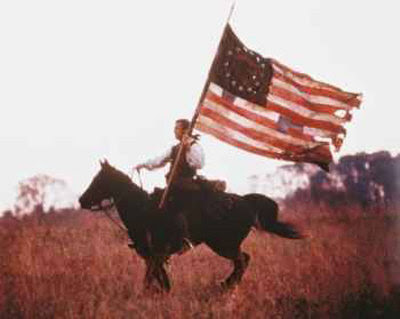 They shouldn't have been able to win - they were facing an army that was trained, seasoned, fed, supplied and paid. The British Armada was 100 ships strong. At one point in the movie, after the the British defeat at the battle of Yorktown, General Cornwallis says, (I don't know if this is an actual quote by Cornwallis)

"How did it come to this - an army of rabble, peasants. Everything will change, everything has changed."

They should not have been able to win - the only way they could have, was with Divine help.

I believe that with all my heart.

You see, I was raised in a very patriotic home. And it really rubbed off on me. I have read quite a bit about the Revolutionary War and I really love this country and all it stands for. Yes, we have plenty of flaws and I'm admittedly a little afraid at the way things are heading, but I still believe that this is the Promised Land.

The Patriot helps me to appreciate the great men and women who starved, froze, fought, and died for a cause which they knew to be just.

At one point in the movie, the younger children in the family are reading a letter from their brother who has been away fighting in the war. He says,

"I envy you - your youth and your distance from this cruel conflict of which I am a part. But I consider myself fortunate to be serving the cause of liberty. And though I fear death, each day in prayer I reaffirm my willingness, if necessary, to give my life in it's service. Pray for me, but above all, pray for the cause." 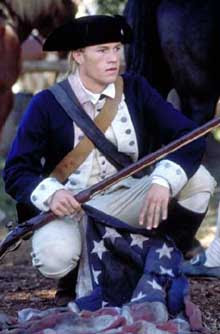 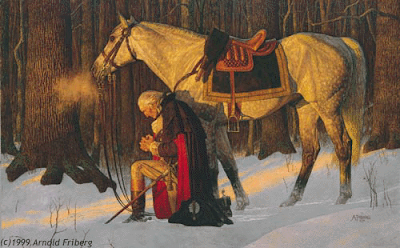 He painted it to celebrate our country's bicentennial in 1976. I recently learned about the story behind this painting. A Quaker man named Isaac Potts who lived near Valley Forge actually witnessed this scene and overheard Washington praying for the army, the cause of "the country, of humanity, and of the world."

So, my lovely husband turned 40 in October and has been pretty good about it, but once in a while he whines a little about being old. Not too bad, but sometimes it's like he's trying to talk himself into being older than he really is. It's part of his slightly pessimistic personality, I guess.

Anyway, today there was a County Health Fair where they were giving free cholesterol screening and other blood tests. He works for the county and asked me if I thought he should go along and take advantage of the the free-ness and all, and I told him he should. Free-ness is a very important thing to my husband - or cheap-ness at the very least.

Then he went through this monologue where he was worrying that what if they told him something he didn't want to hear, what if the news was bad or his cholesterol was high or he was dying or something. (But, no, he's not a pessimist - bless his heart.)

I assured him that he's in great health, freakishly strong, trim and muscular and an exceptionally young 40. I told him that his blood work would be great and that he had nothing to worry about.

So here are the results: 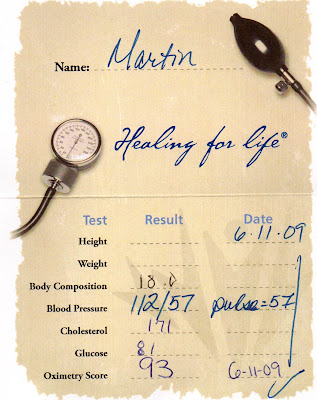 Just as I suspected - a picture of perfect health. Just look at that blood pressure! And a resting heartrate of 57?? RIDICULOUS!

Sheesh, that's what good jeans (um, I mean genes) and clean livin' will do for you. (Someday he'll thank me for making him haul all the hay.) And sleeping like a dead person everynight.

And this is what a perfect 40 year old physical specimen looks like: 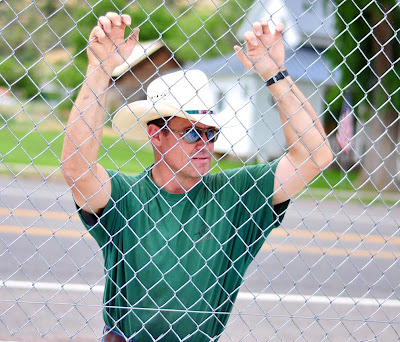 First Swim Day of the Year

It's hard to believe this is our third town pool season. It took 2 years to build the pool and the anticipation was excruciating! When they finally got the pool finished, Bishop stood up at the pulpit (he's on the town council) and announced that "We've finally saved up enough water to fill the pool".

And he was probably not totally off base considering that we're always hurting for water a little bit in this part of the country.

The pool has been a big part of our summer and the first day is always quite an event.

The expressions say it all. 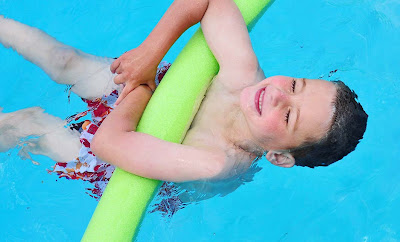 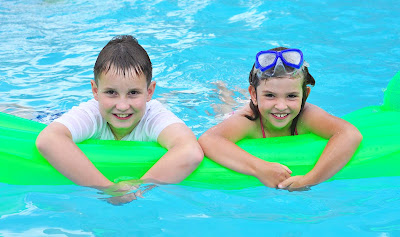 Jaxon got so many points from the reading program at school that he was able to buy this GINORMOUS walrus at the end of the year party. He pretty much just let every other kid at the pool play with it, I had to go and get it back in order to take pictures with it. 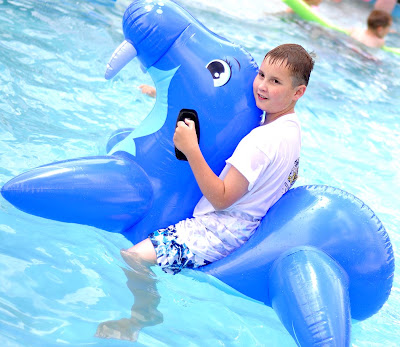 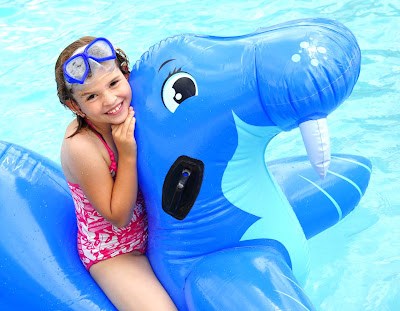 There's only one problem - it took forever to blow up and now we don't really want to deflate it. And we'd just about have to build an addition in order to house the thing.

I hope it doesn't have some kind of accident, you know, like meeting up with a pair of scissors or a stray needle.

That would be a shame. 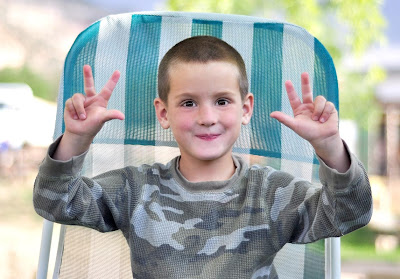 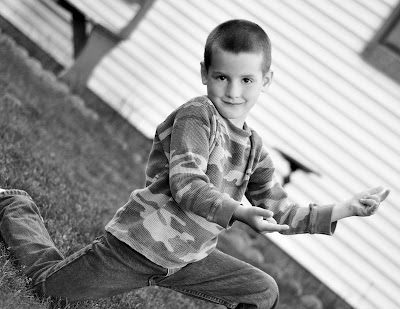 He's now too old to play with bath toys (according to him). But not too old to cuddle with Mom - 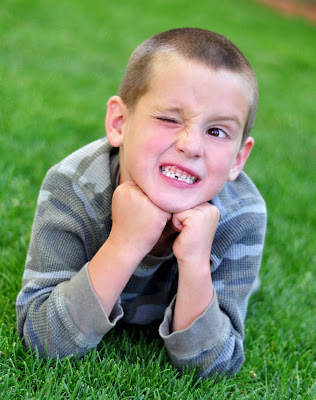