My dad died on Monday. He'd been very ill with diabetes related illness for a long time and his poor body just finally wore out. He was 65.


I went up last Sunday afternoon to be with him and my mom. I don't know that I realized how soon he would go, that this was the last hospitalization in a long line of them, but I got home from church and was sitting at my computer thinking about what was happening for the rest of the day, and just had a feeling - a BFO (blinding flash of the obvious) - that I needed to get in the car and go. Not Marty and the kids, just me.

I called Mom to tell her I was coming and she said she thought that was a good idea. She put Dad on the phone and he was able to say "hello" and that he loved me, but he was pretty out of it. By the time I drove the 4 hours to Provo, he could no longer respond and he acted like he was in some pain and was quite agitated. Along with the liver abscess, he had a whole laundry list of other issues including the fact that his blood pressure would not stay up without a drug being constantly administered through one of the 6 IV lines going into a central line in his heart. He also had pneumonia for the first time in his life and hadn't been able to really keep any food down for about 2 weeks. He'd been on dialysis for almost 7 years and even though his kidneys were being supported artificially, it's not possible to support the liver that way. Mom told me that she figured that he was finally at a bridge he couldn't cross.

We had a conference call with all my siblings and we all concurred - even though it was really Mom's decision - that it was time to let Dad go. We had the nurse - who was so excellent, by the way - remove his feeding tube and give him some pain and anti-anxiety medication even though he was pretty much non-responsive by this time. We asked them to discontinue the medicine keeping his blood pressure up and as soon as it was removed, his blood pressure immediately began to drop. Mom and I waited with him all night and he died about 4:15 on Monday morning. He went very peacefully which was such a blessing. Mom and I were sad, but we also felt peaceful and knew that it was his time.

I stayed most of the day and helped Mom with funeral arrangements. She had wisely, years before, purchased a funeral plan, picked out a casket, arranged for a burial plot and she and Dad had written his funeral program, so there wasn't too terribly much to do. We gathered up photos, sent in his obituary, took his clothing to the mortuary and met with them about the arrangements and final details. We were pretty worn out by the end of that day, but I was so glad I'd felt impressed to come and Mom was glad to have me there.

The funeral was on Friday, the 27th. I was really nice with so many friends and family traveling from very long distances to be there. Sharon and the Atkinsons flew in from Texas, Laura and Craig from San Diego and 5 of Mom's sisters and her brother from Phoenix area. A bunch of our Baldwin cousins even drove all night from Phoenix - about an 11 hour drive to be there for the funeral. What a wonderful family.

So here are a few fun photo of Dad when he was young and hale and hearty and had both his legs. These make me smile - photos are SO IMPORTANT.

Newly married - I believe - sporting a moooo-stash and some kind of police uniform. (He was a policeman for about 12 years.) 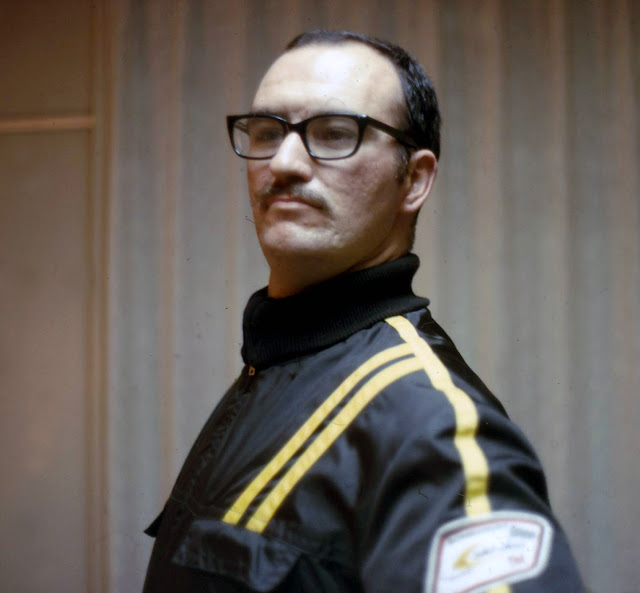 This was taken in Boulder at my grandparent's ranch - Mom and Dad were either newly married or engaged. I love this photo because Mom is so pretty and it has "Bitsy" the horse in it. (A few years later, she was the first horse I ever rode by myself.) 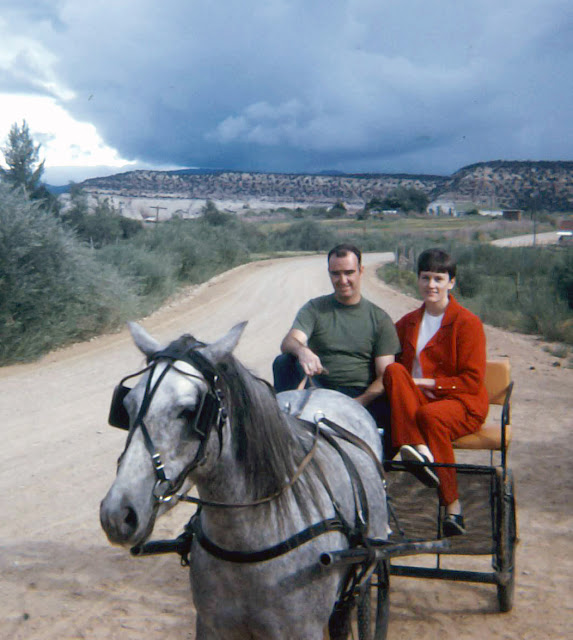 This was the photo we put on the front of the program - I think this was taken in Oregon, the only time that all of us ever traveled up there to see Dad's family. About 1984. 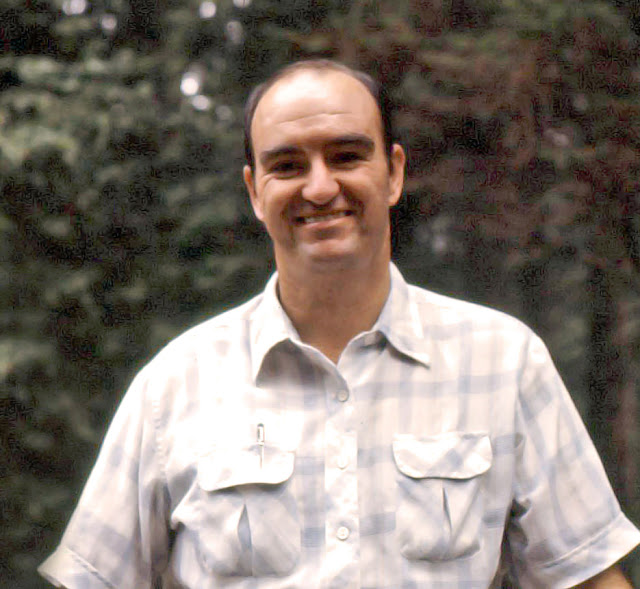 Guess which decade this one was taken - I'll give you a hint: big hair was HUGE back then. 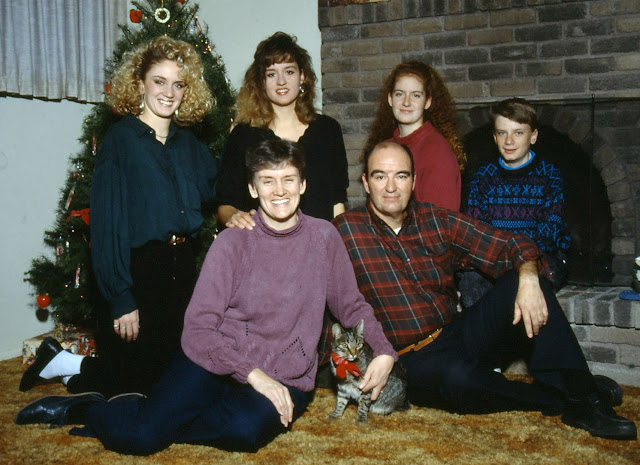 (also featuring our first cat, Gator - I can't believe he ever stood for that ribbon! He was a pretty fierce cat - the bane of the neighborhood dogs.)

Taken at an air show - probably somewhere around the late 80s or early 90s. Dad was a really good photographer back in the day before this digital business made is so much easier. (This goofy mouth thing was a photo trademark of his.) 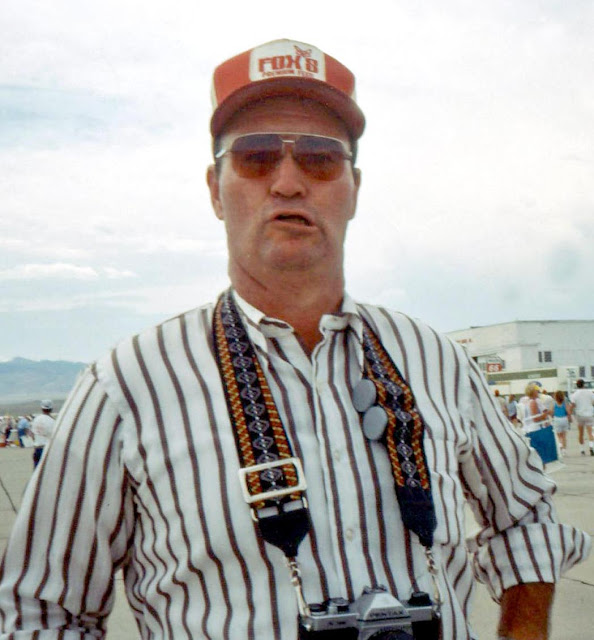 I didn't always have the best relationship with my dad, but I am grateful that it was so much better over the last decade or so. I will surely miss him.

I love you Dad, and I'm glad you can run and throw 90 MPH fastballs again. 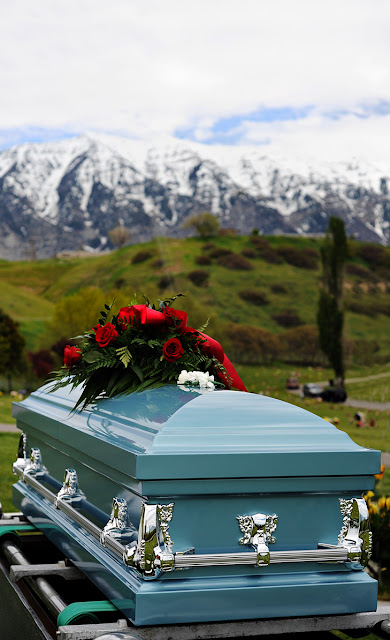 I realize that kids go through stages. They also go through stages of not knowing quite how to be in front of a camera. Luke's been in one of those for a while now. It looks a little something like this: 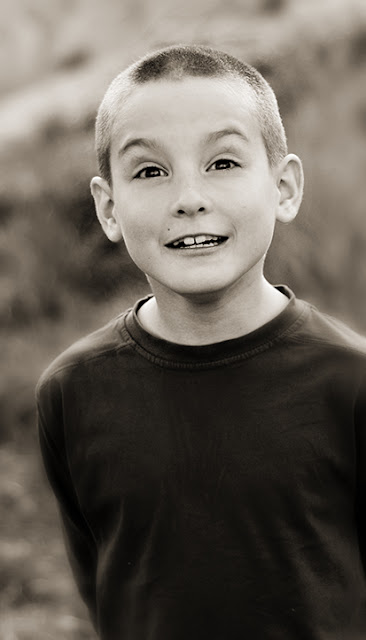 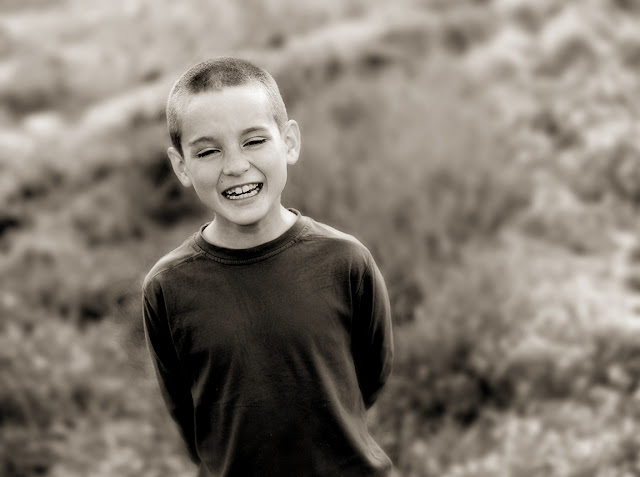 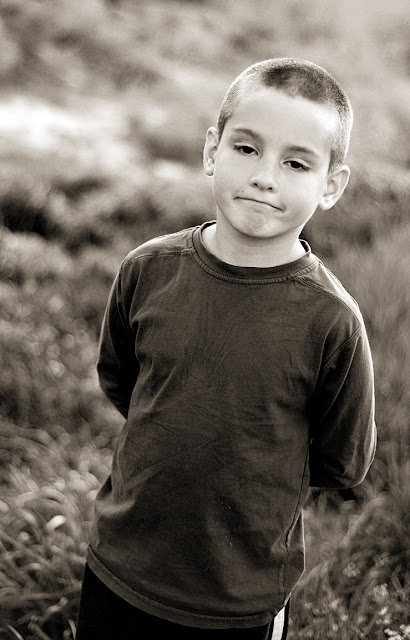 I don't know if he's just messing with me or if he really is feeling like he doesn't know what to do when I point the camera in his direction. The more I try to encourage him to "act natural", the worse it gets.
Oh, wait! I just figured it out - this is his natural! 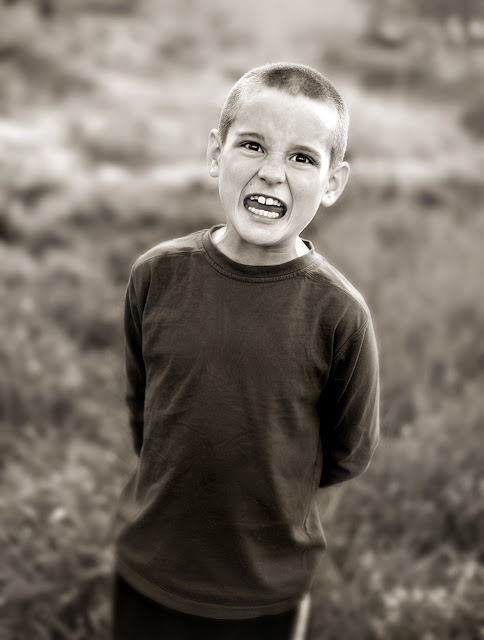 Oh dear.
Well, I guess I'll just go with the flow and hope for some, from time to time, that are slightly less freaky than the rest. 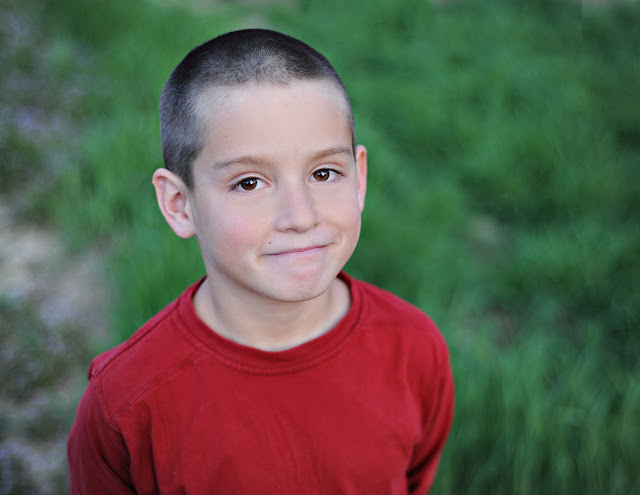 A few months ago, this cute little sleepy baby: 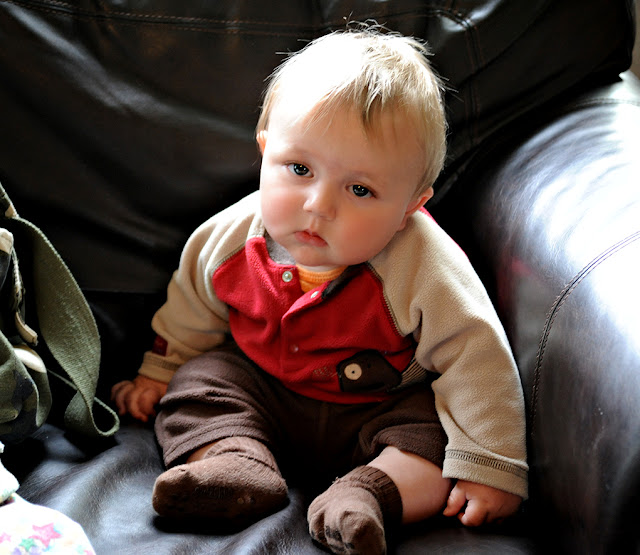 was this cute little sleepy baby: 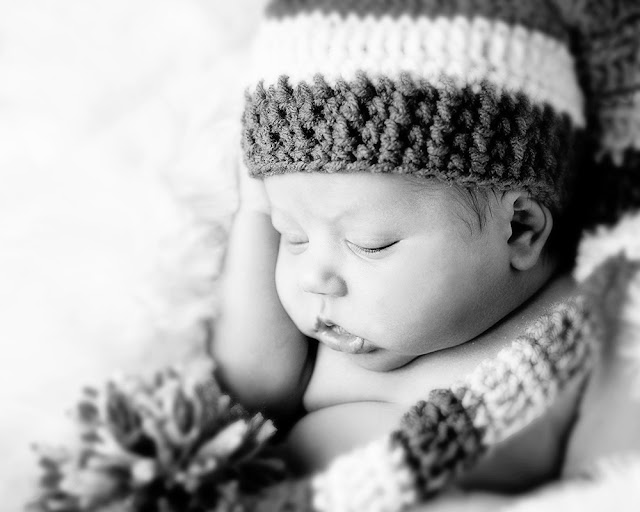 Awwww!
He is my friend Emily's little Eric who was born in November. He's SUCH a good baby, and so cuddly and happy and squishy and sweet - I hold him and kiss him every chance I get. And he hugs me back because I'm cuddly and squishy too and he can tell how much I like him.

On Wednesday this week, I had 8 of my friends and their 13 preschool aged kids, over for lunch for Rachel's birthday and honey lime enchiladas. Yes, the key words in that sentence: 13 preschoolers. On a rainy day in my 1500 square foot house. And yes, it was noisy. Wow. 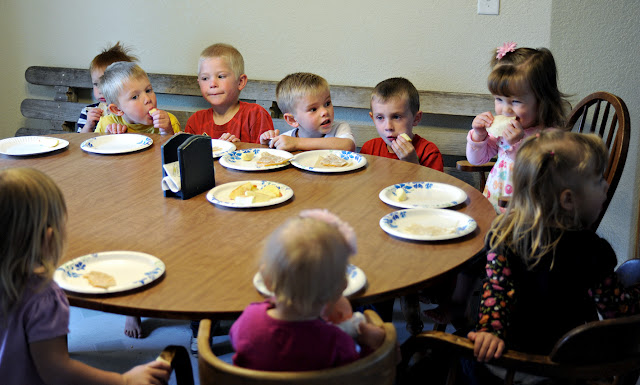 But we had a great time and baby Eric was the quietest person in the house. When it was time to go home, as his mom was gathering up his two brothers, she set Eric on the couch - he can already sit up by himself. I looked over and he was falling asleep sitting up.

I grabbed my camera, even though I had on the wrong lens, and snapped a few quickies from across the room so as not to disturb him.

He would start to drift off and it would make him fall forward, when he was almost on his face, he'd startle himself awake and sit back up and then immediately close his eyes and start to fall forward again. 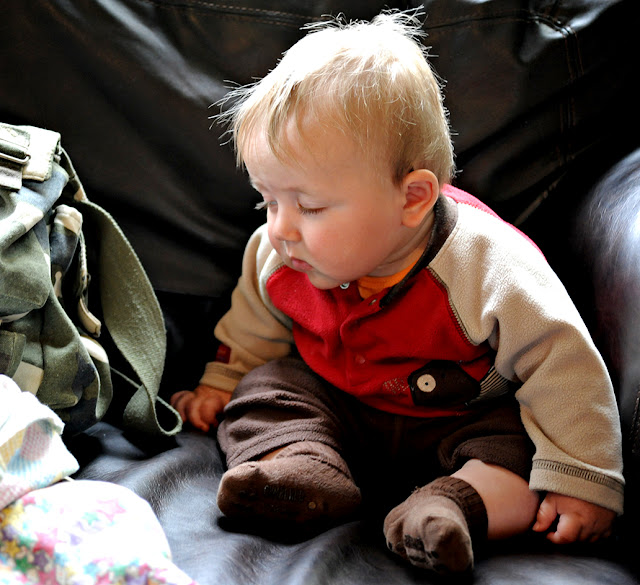 This baby makes me want to have one of my own. If I could somehow be guaranteed this EXACT baby, I might even do it.

Horses in the Background

I was born with an affinity for horses. They were the all-consuming obsession of my childhood and have been the abiding passion of my adulthood. My recent life has been such that horses have sometimes taken a backseat to everything else. Sometimes they're a little more prominent, sometimes less.

I took this photo last night and as I was looking at it this morning, I was struck that this image is a metaphor for the last decade of my life. No matter what new, distracting, interesting or more urgent things are in the foreground of my days, there are always horses in the background. 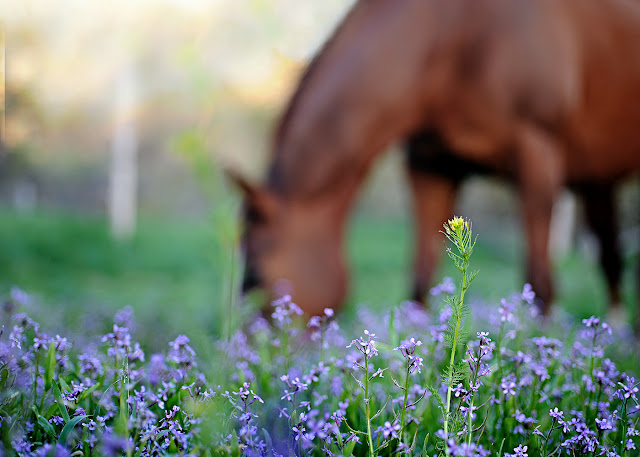